Cable / Adapter with MMCX right angle and SMA-female (bulkhead) connectors. The length refers to the length of the cable between the connectors (not including the connectors).

Compatibility with wireless applications:  Our MMCX to SMA cables' range of frequency band compatibility (from 0GHz to 18GHz),  consistently low broadband VSWR, and impedance matching to 50 Ohm cables, makes them compatible and compliant for all the following applications:

Cable is double-shielded for low signal-loss, and is very flexible/easily bendable. Coaxial cable type is similar to LMR-100 but better quality than LMR100: Coax with black jacket has the same or better signal-loss-per-meter and flexibility as LMR100, and less attenuation (signal loss) than RG174. The double-shielding is a major factor in the higher quality of this cable, translates into lower loss/better performance. Cable is equivalent to LMR-100 in thickness. This cable is rated for outdoor use and is also suitable for indoor use.

ROHS & REACH compliant:  All of our antenna cables and adapters are free of lead and the other toxic materials restricted by RoHS 3 and REACH. 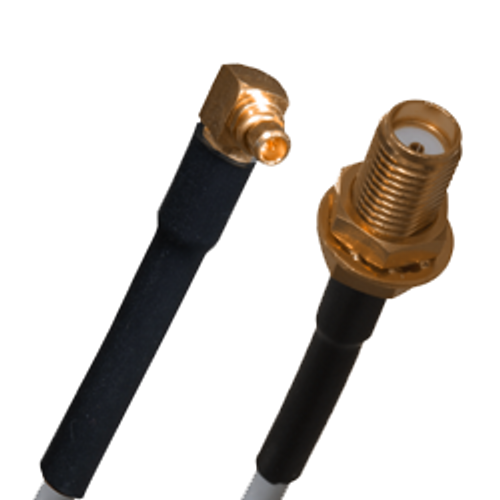