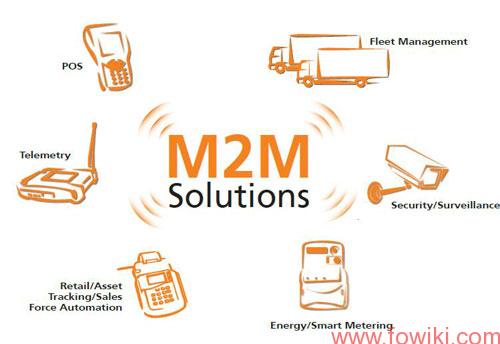 Machine to Machine Communication, also abbreviated as M2M is a modality of communication between machines or devices without any human interaction or control. These devices can speak’ to one another using either wired or wireless data transmission, with wireless M2M in particular becoming a growing field with numerous Internet of Things (IoT) applications being added.

Wireless networking standards in M2M: M2M is able to utilize a variety of wireless protocols, technologies and standards including: Bluetooth, 2G, 3G, 802.15.4, 6LoWPAN, LoRA and LTE among others. Wireless standards should be chosen according to the device’s specification and the environment in which it will be used.

How machine to machine was developed

Wired signaling had been used to connect devices since the early 20th century, but it took a number of decades to develop the means by which such information sharing could take place wirelessly. M2M evolved from efforts to utilize computing and telephony to develop caller ID systems where the telephone number would be transmitted to the receiving device. From that point development and refinement of processing chips to transmit and receive information in this way was undertaken by a range of electronics companies including Motorola and later Siemens. In this time period M2M communication channels moved from dial-up to cellular communication, with Siemens creating the M1 data module for industrial M2M applications.

Moving to wireless communication between machines

At the start of the millennium, Siemens progressed to develop wireless modules with a number of key applications including POS and vehicle telematics. GPS technology in particular has been widely integrated into devices using surface mounting, smart cards and harnessing enabling technologies to effect a variety of testing, monitoring and tracing applications. The advent of IoT has accelerated development of novel and niche M2M module with their attendant wireless gateways, routers and fixed IP addressing. This has meant that M2M now utilizes a variety of wireless networks for data transmission and multiple devices can connected for simultaneous communication rather than the original point-to-point transfer. The adaptation and integration of automation to M2M applications has led to even more efficient information exchange.

The development of mMTC is limited by the availability of the connectivity necessary to support vast numbers of machine to machine interactions. This type of communication is typically via small data packets which are not optimally supported by the cellular networks designed for human communication. Such networking would have to be secure, reliable and consistently scalable with high capacity and low latency to support a range of communications at varying frequency bands. mMTC also needs to have low cost and energy consumption with the penetration needed to function effectively in dense urban or indoor environments.

Next Generation Mobile Networks (NGMN) have been postulated as a potential solution for the support of mMTC offering a single platform ‘ecosystem’ where communication of tens of billions of IP-based devices could be efficiently and securely supported.

mMTC and its relationship to 5G

The advent of 5G is proposed as an opportunity to establish an NGMN able to support mMTC. 5G is expected to become a technology platform capable of supporting huge technological infrastructure and innovation. mMTC may be possible if the sum of machine to machine, device to device, vehicle to vehicle communications could be consolidated into a single 5G supported network.

Currently a variety of organizations and cellular network providers are developing solutions for mMTC connectivity. Focus is on utilizing 5G and LTE ( 4G) as well as unlicensed parts of the spectrum via LPWANs.

Current and future applications of mMTC

Key areas where mMTC applications are being developed include:

mMTC offers the opportunity for IoT expand from limited consumer use to a general or infrastructural amenity that is harnessed by business industry and public sector organizations. mMTC has the potential to critically impact and alter day-to-day living for large populations via the development of ‘smart’ cities where an internet of everything (IoE) creates a fully networked society.