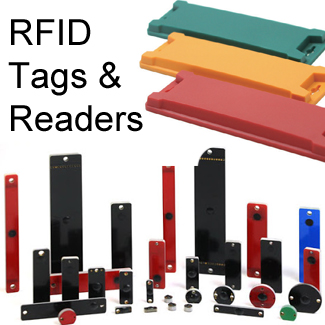 RFID uses radio frequency data transfer for the automatic identification and tracking of RFID-tagged items. This technology has undergone considerable evolution since its development during WWII as a means of identifying aircraft. This wireless auto-ID technology has a wide variety of applications centering on electronically stored information being either transmitted (by active tags) or received (by passive tags). RFID can operate outside of line of sight, or be embedded with tags able to be read within a range of a few inches or centimeters, up to hundreds of meters.

RFID is also classified as an Automatic Identification and Data Capture (AIDC) technology where uniquely identified objects can have data transferred to upstream databases with almost no human intervention.

A simple RFID system will comprise of an RFID tag (also known as a transponder) a reader (also known as a transceiver) and an antenna. Tags typically contain an integrated circuit and antenna in a robust casing, which transmit to the reader. Smart labels contain a printed or etched antenna and minimal circuitry containing the information to be transmitted. The reader communicates with both the tags and an upstream application or data processing system of some kind.

RFID applications have typically focused on asset identification, tracking and control. However next-generation RFID applications are being used in Internet of Things (IoT) deployments, taking advantage of the broad frequency ranges in which RFID operates, particularly the UHF and microwave frequencies.

RFID is able to be utilized as a wireless communication protocol which underpins the identification of objects in IoT. These objects can can be represented in an internet-like structure, monitored and inventoried by computers.

There is currently a convergence of RFID and IoT technologies with developments of internet-based, autonomously operating systems of data capture, transfer and feedback. RFID is now being combined with other information processing equipment such as GPS, GPRS or WSN to network inventoried objects and make them ‘smart’.

As RFID is primarily concerned with the identification of objects, combining this technology with sensors, actuators and upstream internet-based data processing produces an IoT system where items can be monitored and controlled globally in real-time.

Though RFID is an established and widely used wireless technology, it requires more robust access control, authentication and anti-collision protocols as well as refinement to tag designs and reductions in unitary costs to realize its potential.

Antennas play a critical role in the operation of RFID systems. They are designed to operate within the designated carrier frequencies of their specific RFID system. They propagate RF energy both vertically and horizontally to create an electromagnetic (EM) field that can be identified along with the transmitted data. The bigger the EM field wave coverage patterns generated by these antennas the lower the overall signal strength.

Passive RFID tags have a flat antenna coil which is activated by supplying an energizing RF signal. Induced antenna coils are typically tag antennas therefore do not require a power source and only communicate their data when energized. The greater the net area of the printed, etched or embedded antenna coil, the further its read range and ability to absorb RF energy.

A wide range of RFID antennas are available and designed to partner with variety of RFID systems. Types include UHF antennas, polarized antennas and patch antennas.