RP-SMA = Reverse Polarity SMA. RP-SMA is a round screw-type connector, with medium-sized, threaded coupling connectors that are rated for frequencies from the lowest (DC) up to 18GHz: This antenna cable is compliant for  all types of wireless antennas, including wireless / WiFi networks, BlueTooth, ZigBee, Cellular voice & data, and WiMax: 802.11N, AC, G, A, B. 900MHz, 2.4GHz & 5GHz applications, as well as any other frequency between 0 and 18GHz.

FAKRA connectors are embedded within a plastic housing which features multiple color codes for easy identification and unique keying to prevent mis-mating. FAKRA connectors are designed to perform up to 3 GHz and meet the particular mechanical and environmental requirements of the automotive industry. FAKRA connector is based on the FAKRA and USCAR standards.

Our SMA to FAKRA cables' range of frequency band compatibility (from 0GHz to 18GHz), consistently low broadband VSWR and impedance matching to 50 Ohm cables, makes them compatible, suitable and compliant for all the above applications. 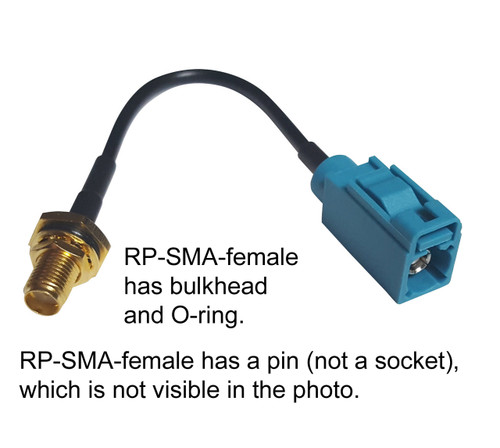