One end has a MHF4 connector, and the other end has a RP-SMA female connector with a bulkhead-mount.

RP-SMA is a round screw-type connector, with medium-sized, threaded coupling connectors that are rated for frequencies from the lowest (DC) up to 18GHz: This antenna cable is compliant for all types of wireless antennas, including WiFi & WiMAX networks: 802.11N, AC, G, A, B. 900MHz, 2.4GHz & 5GHz applications, ISM, GSM, LTE antennas, as well as any other frequency between 0 and 18GHz.

Cable is 1.13mm mini-coaxial cable (50 ohm antennas and cables.): This is a very thin and flexible cable, with a black jacket. When connecting U.FL connector to a jack on a miniPCI card or board, often the tight space requires the use of 1.13mm cable, because it is very thin and flexible (diameter is 1.13mm). This very thin cable is typically needed in tight spaces inside of enclosures, so that the U.FL connector will snap down on the jack without popping off.

Our MHF4 to RP-SMA series coaxial cables have medium-sized, threaded coupling connectors designed for use from DC to 11 GHz. Their consistently low broadband VSWR have made them popular over the years in many applications.

MHF4 connectors are the smallest mini RF connectors ever made for coaxial antenna cables. Their low profile of only 1.2 mm means that they provide good working performance in a variety of Wireless LAN applications.

MHF4 connectors and cable assemblies provide stable frequencies of 0 to 6GHz and 50 Ohms of characteristic impedance. They are made of copper alloy, which is then plated with gold which further enhances their effectiveness. They are also highly flexible and will allow 360-degree mounting of the cable. The connectors can be terminated in 1.13 and 1.32 and coaxial cables.

The MHF4 to RP-SMA series cable is impedance matched to 50 ohm cables. 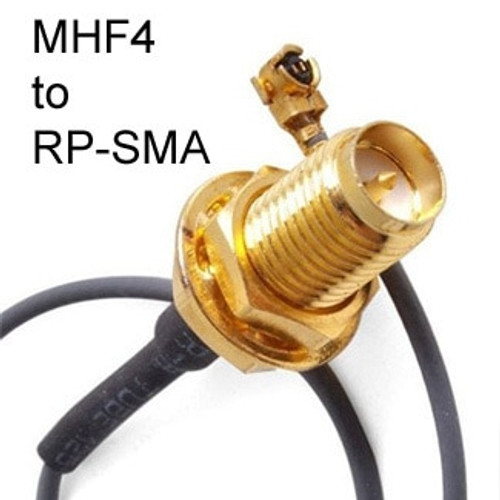