One end has a MHF (also known as MHF1) connector, and the other end has a RP-SMA female connector with a bulkhead-mount.

RP-SMA is a round screw-type connector, with medium-sized, threaded coupling connectors that are rated for frequencies from the lowest (DC) up to 18GHz: This antenna cable is compliant for all types of wireless antennas, including WiFi & WiMAX networks: 802.11N, AC, G, A, B. 900MHz, 2.4GHz & 5GHz applications, as well as any other frequency between 0 and 18GHz.

Cable type is 1.13mm Mini-coaxial (Impedance-matched to 50 ohm). See note about options for thickness of the coax, and note that we can make special orders with double-shielded LMR-100 equivalent cable, if you wish, for better flexibility.

This coaxial cable is rated for outdoor use and is also suitable for indoor use.

MHF miniature RF coaxial connector is the same as U.FL. It is 100% compatible with U.FL. MHF I-PEX connector provides good working performance in various applications of Wireless LAN up to 6GHz applications.

This cable assembly is ROHS compliant

The mini-PCI card in the photos is for compatibility-evaluation only and is not included in the listing. 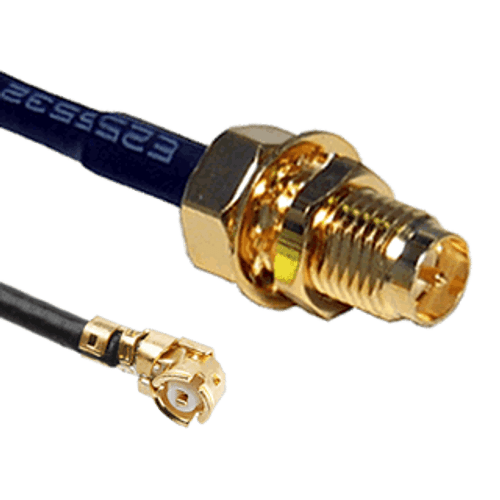