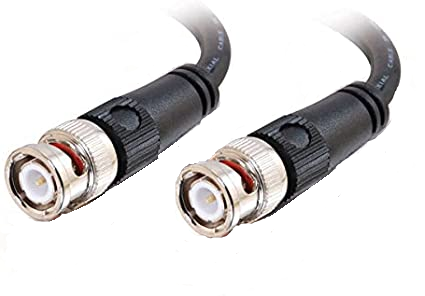 Data Alliance’s BNC cables made with RG59 and RG179 are compliant with the SMPTE 424M standard for 3G-SDI and HD-SDI video systems.

BNC 75 Ohm cables  are a version of BNC coaxial cable assemblies that is widely used for audiovisual applications. It consists of a length of 75 Ohm impedance coaxial cable that is terminated at both ends by 75 Ohm Bayonet Neill Concelman (BNC) connectors. The impedance of both the cable and connectors is distinct and routinely incompatible with 50 Ohm versions.

The quality of the cable is critical to the overall performance of an SMPTE-compliant video system. A dysfunctional or failed cable will affect all the channels and potentially prevent the audio equipment from functioning.

The Society of Motion Picture and Television Engineers (SMPTE) is an audiovisual and media group that comprises media professionals, engineers, and technologists who have produced over 600 industry standards for the digital transfer of video over coaxial and fiber optic cable. This type of video signal transfer over multiple wired links is known as Serial Digital Interface (SDI).

These standards have contributed to the widespread adoption of uncompressed video that is low latency, cost-effective and advantageous in real-time surveillance and mission-critical applications. Though initially developed in the broadcast media industry SDI is frequently used in defense or law enforcement sectors for video-based mission systems.

The third generation of SDI is known as 3G-SDI and is a revision of the SMPTE 424M standard which specifies a video resolution of 1080 pixel video with 60 frames per second and data transfer speeds of up to 3 Gigabit per second.

Color images are serially encoded and transferred using RGB tristimulus values that are linearized and then corrected to approximate the perceptual responses of human vision.

SDI uses system nomenclature that delivers the active video format of an image with a resolution of 1920 by 1080 pixels.

3G-SDI uses a coaxial interface for the distribution of video signals in broadcast environments. Coax-based 3G-SDI networking uses Emitter-Coupled-Logic (ECL) a high-speed technology with a propagation speed of under 2 nanoseconds. The system impedance is 75 Ohms and the input/output voltages may be up to 0.8 volts. Transmission along the lines is unidirectional. Coaxial cables used for 3G-SDI are terminated with the BNC connectors described above.

The SMPTE 424M standard does not detail the exact type of coax to be used in BNC cable assemblies, other than specifying:

On this basis, SDI uses RG 59U or RG-6 cable. RG-179 may also be used for shorter runs. The SMPTE standard states that the use of 50 Ohm BNC connectors with 75 Ohm cable is not compliant, though this practice has been used for lower bandwidth composite video. The cable should be stored and handled properly to ensure that any signal degradation is minimized.

The video is encoded and the serialized data is scrambled before being transmitted as a bitstream down the coax cable. The SDI data payload includes the syncing, Timing Reference Signals (TRS) for the video and active video data is transferred at speeds between 143 Mbps and 3 Gbps. Ancillary data can also be simultaneously transferred in areas of the data stream not occupied by the video.

Other standardized physical layer SDI components that work with BNC connector cables include:

The physical media for 3G-SDI broadcast video requires components like equalizers to perform optimally. This is because the passage of audiovisual digital signals through cable and other components will degrade (phase distortion and attenuation) the signal, with the cable functioning as a low-pass filter.

Signals sent through the 75 Ohm coaxial cable will be significantly degraded after traveling distances greater than 100 meters (328 feet) from the source. Attenuation increases in proportion to the square root of the signal frequency, with phase distortion being equal to the attenuation.

Due to demand from studios for installations of increasing size, equipment sizes and cable runs are larger and longer. At the destination, transmitted 3G-SDI signals routinely require restoration and processing. Adaptive cable equalizers are a critical component for recovering this data. They use high pass filters with a corrective function that can eliminate any degradation present.

The quality of the cable assembly matters very much: High-quality BNC connectors that correctly terminate the cable with crimping or soldering provide a low-loss connection with discontinuities kept to a minimum. If the cable is self-assembled crimping, with the correct tool, often proves more reliable than soldering.

RG59 cable sometimes carries the suffix /U, which indicates that the cable is suitable for general purpose or Utility use.

Our standard and custom length BNC cables are manufactured in compliance with the Restriction of Hazardous Substances (RoHS) Directive, meaning that the use of certain hazardous substances in their manufacture is limited. They also comply with domestic and international conflict mineral legislation including The Conflict Minerals Regulation and Section 1502 of the Dodd-Frank Act.

Attenuation comparison of RG58 and RG179

What is an SDI router?

SDI routers are devices that can route digital video signals from a variety of inputs including DVD players, computers, and cameras to a range of displays, including projectors and monitors. may also be known as a video matrix switch or video router.

They are usually classified by the number of inputs x the number of outputs they can accommodate (e.g. 256 x 256). 1K x 1K routers are not uncommon. The routers also vary in the range of video formats they can handle and connector types they carry.

Jitter is a term used to describe artifacts in a video signal transmission that are due to signal instability. They are usually in excess of a specified frequency, in the case of HD-SDI, 100 kHz. They may affect video alignment or timing. Most video transmissions are affected by jitter to a limited extent and with jitter that is within specified limits being tolerated.

SMPTE standards will require no more than a certain threshold level of jitter on compliant video output, with SMPTE 424M standards being particularly stringent. For assessment of jitter, the signal is assessed at source, via 1 meter (3.28) length of cable. The signal should meet the following standards:

Can MADI be sent through digital video switching systems?

Though RG59U and similar cables are recognized as video cables, the video distribution and switching systems they are connected to are not configured to relay digital audio.

A wideband video splitter amplifier may be capable of splitting that can accommodate transmission of MADI data.

How can I test the performance of coaxial cable in audiovisual applications?

Testing cable assemblies provide reassurance that the cable will perform as specified and deliver a good quality of image or sound output. Testing is performed by using a 200 MHz oscilloscope, which allows a visual assessment of the digital video or audio waveform and comparison to standard parameters including:

The characteristic waveform shape and characteristics are directly related to the quality of the sound or image. Digital audiovisual standards like SMPTE or MADI specify limits on the distortion of the waveform.

The Bayonet Neill Concelman connector is a miniature radio frequency connector with quick connect/disconnect functionality that carries a characteristic two-stud bayonet mating mechanism. The eponymous connector was developed by Paul Neill and Carl Concelman from earlier designs in the 1950s. It was initially used for military communications but over time the applications of this connector have diversified to include telecommunications, aerospace, and digital audio and video as described in detail below. It is available in either 50 Ohm or 75 Ohm versions that have slight physical differences.

The BNC connector body is typically made from machined brass with nickel plating. With the connector, the insulator may be made from Teflon or Delrin. The male conducting pin is made from gold or silver-plated brass and the female receptacle is made from gold-plated phosphor bronze. The connector also carries a silicone rubber gasket to seal the mated connection.

BNC cable with RG59 or RG179 has the physical and electrical attributes necessary to comply with the leading digital audiovisual standards. These high-quality and robustly manufactured cables provide reliable performance for transferring, routing, and broadcasting digital video and audio as well as telecommunications and other applications.