Cable is double-shielded, low-loss and very flexible. The cable-type is equivalent or better than LMR100: Coax with black jacket has the same or better signal-loss-per-meter and flexibility as LMR100, and less attenuation (signal loss) than RG174. The higher quality of the cable of this antenna translates into lower loss/better performance. This cable is rated for outdoor use and is also suitable for indoor use.

RP-SMA is a round screw-type connector, that is rated for frequencies from the lowest up to 18GHz:

RP-SMA has medium-sized, threaded coupling connectors that are rated for frequencies from the lowest (DC) up to 18GHz: This antenna cable is compliant for all types of wireless antennas, including wireless / WiFi networks, BlueTooth, ZigBee, Cellular voice & data, and WiMax.

Data Alliance's high-quality soldered terminations of MMCX and RP-SMA connectors with soldering provide a low-loss connection with discontinuities kept to a minimum.

This MMCX to RP-SMA cable is compatible with (fits) all WiFi cards & GPS units with an MMCX antenna jack:

Compatible with all Helium miners used in North America, including Bobcat miners, Sensecap miners and all other Helium LongFi miners, as are all of ourantenna cables and adapters with RP-SMA-male connectors

Gender of RP-SMA-connector is counter-intuitive. 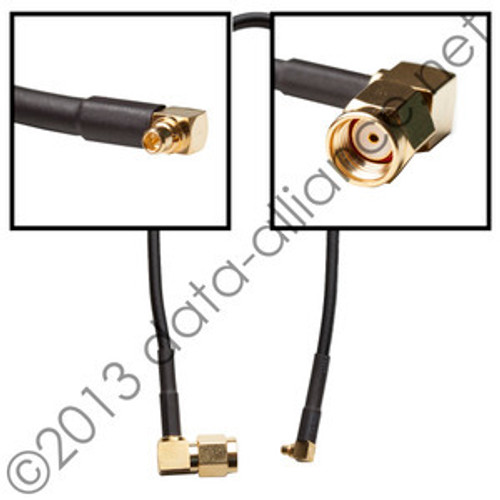