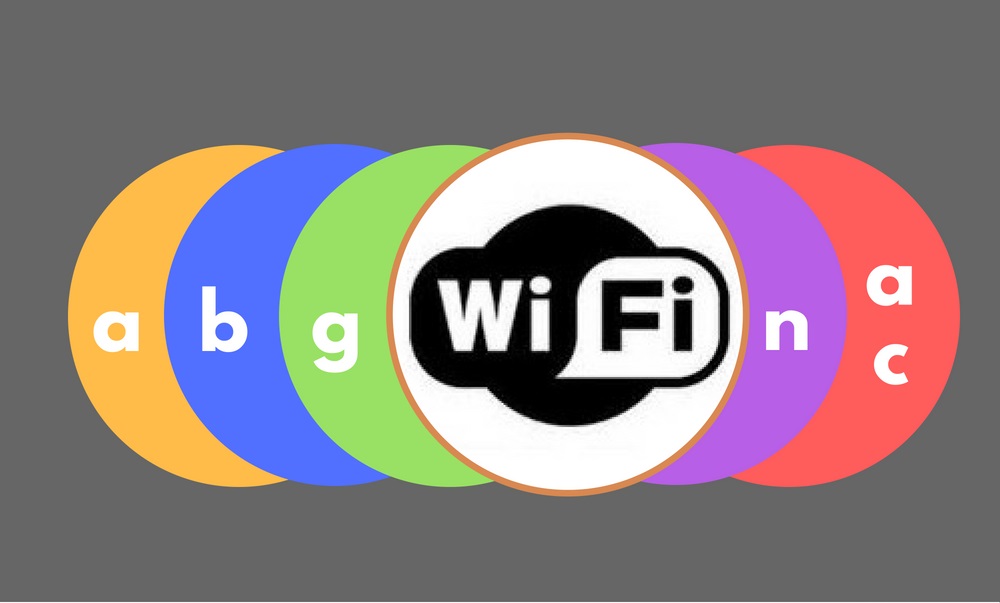 This quick guide provides a comprehensive overview of WiFi networking as well as useful tips and tricks to assist you in optimizing the performance of your WiFi-based networking.

Common types of WiFi, in order of latest to oldest:

WiFi 6 is the latest iteration of WiFi and is due to be formally released in late 2020. Wi-Fi-802.11ax takes advantage of several unlicensed bands with operating frequencies between 1 and 6 GHz. It has greatly increased speed and spectral efficiency. WiFi 6 devices are operable at both 2.4 GHz and 5 GHz and WiFi 6E specifies devices that can operate at 6 GHz. WiFi 6 is lauded for high data rates of up to 11 Gbit/sec and low latency. WiFi 6 features include multi-user MIMO and OFDM which support far greater capacity and throughput than previous versions. WiFi 6 can support far higher numbers of WiFi devices on a single network.

See our detailed explanation of all WiFi types (WiFi network standards) with advantages and disadvantages of each and frequency bands used, etc.

Key Components of a WiFi Network:

A fully functioning WiFi channel requires the following components for optimal connectivity which essentially mirror those of wired ethernet networks.

User devices include computers, smartphones, and any other appliances or equipment that has wireless capability.

Radio cards are also known as wireless radio Network Interface Controllers (NICs) and provide wireless connectivity to user devices. The radio card, PC cards, or mini-PCI are equipped with the relevant 802.11 capability and will operate following the specific versions of WiFi it is programmed for.

WiFi Access Points (AP) are the interface between wired and wireless networking. APs contain a radio card that permits connectivity with networked routers and devices. Alongside the wireless radio card is a wired NIC that interfaces with the wired distribution system.

WiFi routers do the work of transferring data, selecting the best channels over which data packets should be sent to their destination. Many local area networking routers will have ethernet connectivity and perform the work of an access point.

WiFi repeaters are included in WiFi networks to extend their coverage by literally repeating the signal to extend its range. Repeaters can receive and transmit onwards signals from APs and end-user devices without any wired connections.

WiFi antennas for WiFi are typically omni-directional and resonant at either 2.4 or 5 GHz. WiFi antennas attach to routers and access points and may be able to be exchanged for a more powerful antenna of corresponding frequency. Radio cards may also be equipped with a connector for an external antennas. Directional antennas can also be useful for creating wireless links for WiFi or providing more focused coverage.

Wi-Fi is a wireless networking technology that is used to create Wireless Local Area Networks (WLAN) in accordance with operational standards devised by the Institute of Electrical and Electronics Engineers (IEEE). It is just over two decades old and supersedes the wired local area networking technology known as ethernet. WiFi is not only for networking enabled devices, but it also can be used to access the internet, providing wireless internet access via a suitable access point (AP). Everyday devices like smartphones, laptop computers, printers, and cameras utilize WiFI, particularly for internet connectivity, and to exchange data with one another.

What does Wi-Fi stand for?

The term WiFi is believed to be an abbreviation of Wireless Fidelity but is simply a brand name that is trademarked by the IEEE’s Wi-Fi Alliance as a play on ‘Hi-Fi’. As a proprietary brand, devices that carry the Wi-Fi logo must meet defined and certifiable operational standards that assure users of compatibility with other Wi-Fi compliant networking components. The WiFi Alliance publishes the detailed standards, 802.11, that oversee the operation of Wi-Fi. These specification standards are now in their 6th iteration known as WiFi 6 (802.11ax) and typically specify the frequencies, bandwidths hardware, and access points needed for optimal wireless connectivity.

The multiple WI-FI Technologies types (which are listed at the beginning of this article) are based on the specifications of particular versions of the 802.11 protocol. You can usually check the version of WiFi used on a device's labeling to ensure that you have compatibility in your network components. Devices and hardware are usually able to function optimally using more than one version of WiFi but will only attain optimal connectivity with a version that they have in common, with most devices and networking components having backward compatibility.

There are currently 6 main versions of WiFi which typically differ according to:

How does WiFi work?

This wireless network facilitates the exchange of data packets via ultra-high frequency and microwave radio communication. This data exchange uses two key methods to encode the data to be transmitted on the multiple carrier frequencies within the Wi-Fi frequency bands.

• Direct-sequence spread spectrum (DSSS) is a method of changing the carrier signal used to transmit the data packets by spreading the signal over a wider bandwidth than is necessary for the data alone. This is done to protect the data transmission from interference. The data packet is broken up into bits that undergo pseudorandom modulation. Once transmitted the received signal is demodulated for recovery of the data.

• Orthogonal frequency division multiplexing (OFDM) is an alternate and more sophisticated method of encoding data used by a number of the more recent versions of WiFi. This wideband communication technique involves dividing the entire available frequency band into multiple non-overlapping sub-bands, spread orthogonally, which each carry a small portion of the data packet to be transmitted. This robust method can support high-volume and high-speed communications and is often partnered with MIMO.

• Each WiFi-enabled device has its own, globally unique address in the form of a 48-bit media access control (MAC) address. The use of these addresses determines the source and destination of the data transferred. Receiving devices will use the MAC to determine the relevance of received signals, rejecting data that is being sent to other WiFi stations.

What is a star network?

A star network or spoke and hub topology is a network arrangement where networked objects and devices are connected to a central hub. It can be used for local and wide area networks. The hub functions as the network controller with either single or bi-directional communication between the subordinate devices and the hub. Star networks are resilient because a breakdown in communication between one downstream device and the controller does not stop the entire network from functioning. Omni-directional antennas are often used in star networks as it can support the necessary point to multipoint connectivity.

What is a mesh network?

This is a network topology comprised of nodes, which either redistribute transmitted signals or are an end-point for communications. Participating nodes may be full or partially connected in hierarchical or dynamic arrangements. This topology facilitates the efficient routing of data by hopping from node to node. Mesh networks are highly scalable and energy-efficient, especially when used in LP-WANs.