Multiple In / Multiple Out (MIMO): 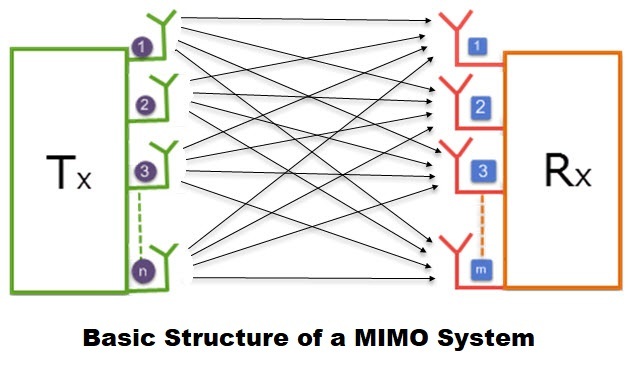 MIMO technology: By overlaying the signals of multiple radios, Wireless-N's "Multiple In, Multiple Out" (MIMO) technology multiplies the effective data rate. Unlike ordinary wireless networking technologies that are confused by signal reflections, MIMO actually uses these reflections to increase the range and reduce "dead spots" in the wireless coverage area. The robust signal travels farther, maintaining wireless connections up to 4 times farther than standard Wireless-G.

Multiple-input and multiple-output, or MIMO (pronounced mee-moh or mai-moh) refers to the use of multiple antennas both at the transmitter and receiver to improve the performance of radio communication systems. It is one of several forms of "Smart antenna" smart antenna (SA) in a narrow sense or the state of the art of SA technology. MIMO technology offers significant increases in data throughput and link range without additional bandwidth or transmit power. It achieves this by higher spectral efficiency (more bits per second per Hertz of bandwidth) and link reliability or diversity (reduced fading). Because of these properties, MIMO is a central theme of international wireless research currently (2007).

MIMO antennas: MIMO uses multiple transmitter and receiver antennas to allow for increased data throughput via spatial multiplexing and increased range by exploiting the spatial diversity, perhaps through coding schemes like Alamouti coding. Antenna are listed in a format of 2x2 for two receivers and two transmitters. A 4x4 is four receivers and four transmitters. The number of antenna relates to the number of simultaneous streams. The standards requirement is a 2x2 with two streams. The standard does optionally allow for the potential of a 4x4 with four streams.

Deployment: To achieve maximum throughput, a pure 802.11n 5 GHz network is recommended. The 5 GHz band has substantial capacity due to many non-overlapping radio channels and less radio interference as compared to the 2.4 GHz band. An 802.11n-only network may be impractical for many users because the existing computer stock is predominantly 802.11b/g only. Replacement of incompatible WiFi cards or of entire laptop stock is necessary for older computers to operate on the network. Therefore, it may be more practical in the short term to operate a mixed 802.11b/g/n network until 802.11n hardware becomes more prevalent. In a mixed-mode system, its generally best to use a dual-radio access point and place the 802.11b/g traffic on the 2.4 GHz radio and the 802.11n traffic on the 5 GHz radio.