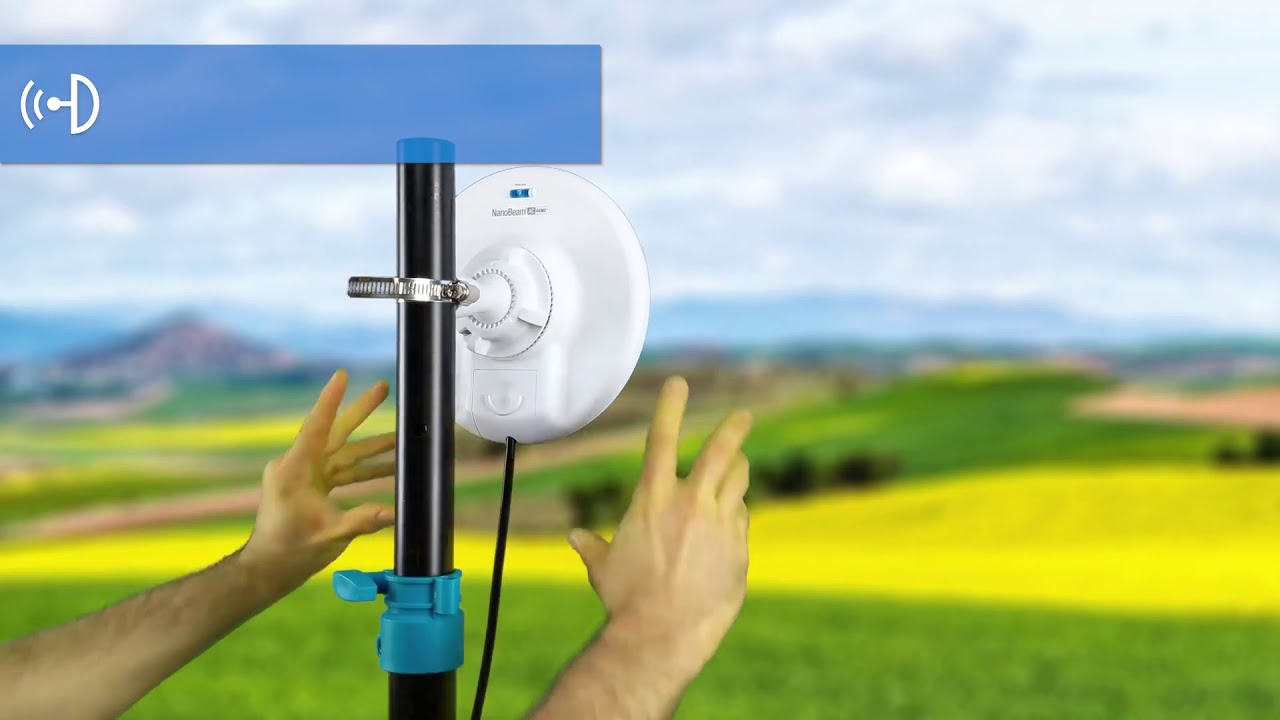 Spatial diversity is a useful feature for overcoming multi-path interference. By providing spatial diversity, the radio's internal circuitry can select between the two receive antennas for better wireless reception.

Links and connections over water, over long distances, can be very difficult because of the radio beams reflecting off the water, which creates multipath interference for the radio waves.

In the case of 802.11ac or MIMO applications, two or more spatially or polarization diverse antennas are required for the radio to operate at its highest data rate.

One challenge with modern wireless commutation is heavy interference from the increasing airwaves transmissions over a limited frequency band. This problem has led to improvement in transmitting technologies towards spectral efficiency. Spatial multiplexing is one of the more successful ways of improving wireless transmission quality.

Orthogonal frequency-division multiplexing (OFDM) is a method used to modulate digital data stream onto multiple carrier frequencies separated by narrowband channels. This multiplexing reduces cross-talk and interference. Most MIMO systems are OFDM based. Several modern applications such as LTE, LTE+, DSL and wireless networks user OFDM in their transmission process.

The main advantage of OFDM transmission over the alternative single carrier is its ability to cope with channel constraints such as attenuation, interference, and frequency fading due to multi-path. MIMO OFMD currently achieves the highest spectral efficiency and delivers the highest capacity throughput on wireless transmissions.

Spatial multiplexing is ideal for improving coverage in high-density areas and eliminating potential blind spots. Its ability to cope with heavy interference while still delivering high SNR transmission affords it this purpose.

Antenna spatial diversity, also called antenna diversity or space diversity, is the practice in radio communications of enhancing a wireless link by using two or more antennas for signal transmission.

Spatial diversity is always reliant on providing a receiving antenna or antennas with multiple observations of a signal, transmitted by more than one antenna with different locations and positions. In certain environments, a single transmitting antenna may be vulnerable to fading, dropout, lost connections, or other forms of interference. The use of multiple antennas increases the likelihood that you will receive the signal correctly and that a better signal will be received from at least one of the antennas involved. Accurate recovery of the original transmission is also feasible by using the redundancy from the multiple received signals. This physical layer (PHY) strategy is advantageous for data transfer in non-static environments where there is little or no line of sight and signals can be easily corrupted as we explore below.

Spatial diversity is one of the diversity schemes available to improve signal quality and reliability.

Spatial diversity is one of a number of methods used in radio communications to improve the robustness of transmitted signals and minimize fading and interference. This is done by using a plurality of communication channels with varying characteristics. Alternate diversity schemes utilize factors such as time, frequency, and Polarization to reinforce signal transmission, but spatial diversity is characterized by the synchronous transmission of a single signal between multiple distinct transmitting and receiving antennas. It is important to note that at least two antennas with the same characteristics must be used and it is not the timing of the signal that produces the diversity but rather the number of antennas involved.

Antenna diversity can be further subdivided into:

Multipath is essentially the non-linear propagation of a radio frequency signal between transmitter and receiver. In this circumstance, the electromagnetic waves travel via multiple paths through their environment, created by physical obstructions and surfaces that may absorb or reflect the signal. Radiofrequency signals display optic phenomena such as reflection, refraction, and diffraction, and will bounce off objects like buildings or vegetation leading to delayed, altered, or out-of-phase arrival at the receiver. Each reflection produces multiple new wave fronts that duplicate the original signal. Rather than the original signal, several temporally spaced wave fronts will instead reach the receiver.

Multipath is a common problem in built-up environments where hard, metallic or reflective surfaces are present for the signal to bounce off. Warehouses, aircraft hangars, and manufacturing areas are particularly susceptible. Materials such as glass, concrete, steel, and other metals in the vicinity of transmitting or receiving antennas will promote the multipath effect.

Links and connections over water, and across long distances, can also be very difficult because of the radio beams reflecting off the water, creating multipath interference for the radio waves as we explore below.

The degree of multipath present in radio communications is indicated by delay spread. This is defined as the difference between the time arrival of the first coherent signal components and the last multipath elements. Usually measured in nanoseconds, delay spread varies with the environment in which the signal is transmitted.

Tropospheric multipath pertains to the atmosphere closest to the surface of the earth and produces a random pattern of reflections. This form of signal propagation has a number of often difficult to control effects which often lead to corruption of the transmitted signal. This is because the electromagnetic waves will have traveled varying distances and at different speeds to reach the receiver out of phase. These phase shifts, delays, and signal attenuation have a deleterious effect on the received signal.

The effects of multipath interference experienced may include:

Antenna diversity is a targeted solution for effective mitigation of adverse multipath effects. These physically separated antennas provide a receiver with several observations of the transmitted signal therefore the signal is observed having passed through a range of interference conditions. This increases the chance that the correct signal can be successfully reconstructed at the receiving end and counteracts the radio nulls and echoes that would necessitate repeated data retries. The physical separation of diversity antennas also ensures that antennas experience varying levels of multipath interference with one or some having better signal quality and overall performance. The collective effect of these antennas working in concert, sending the same data packets over more than one path between transmitter and receiver is a more robust wireless link in challenging conditions. Spatial diversity is ideal for improving coverage in high-density areas and eliminating the potential blind spots that particularly hamper urban and industrial environments.

Radiofrequency signals that are propagated over bodies of water are highly susceptible to multipath interference. The water surface, especially if tidal, subject to winds or currents is uneven and extremely reflective leading to the creation of multiple alternate wave fronts and echoes. The temperature interface between air and water can also induce thermal ducting and notable signal loss. The proximity of the wireless link touch water surface will produce the strongest effects and one of the key strategies for ameliorating water-induced multipath is to raise the endpoints of the wireless link high enough to minimize multipath. If this is not possible, antenna diversity with the erection of secondary parallel links can prove effective. Spatial diversity requirements for wireless links over water need careful assessment and geometric separation to achieve adequate connectivity which is usually planned most effectively by a site survey.

Antenna selection is critical to the success of a diversity setup. For a properly functioning system, antennas should be closely matched for all characteristics (ie. frequency, impedance, Polarization, pattern, etc), at least being of the same type and gain. Diversity schemes usually involve the antennas being vertically separated, but with enough proximity to be covering the same area. They should be kept as close as possible to the coverage area and one another to avoid excessive cable runs. Diversity setups with two antennas within shared housing are also possible, provided the transmitting and receiving elements are distinct and separately cabled. Though more hardware and cabling is needed than with a single antenna pair, much of the radio frequency circuitry is shared between the transmitting or receiving antennas. At the receiving end, more processing power will be needed for carrier sense functionality that can discern the signal that meets a pre-programmed signal threshold and switch the system to listening to the antenna it came from.

There are different types of antenna diversity setups depending on the application and available hardware.

Diversity schemes are broadly reliant on carrier sense (CS) algorithms. Also known as 'listen before you talk', CS refers to the ability to monitor the signal transmission from the diversity antennas for signal intensity or quality and make a switch to the antenna whose signal exceeds a predetermined threshold. This helps to maintain optimal throughput and data loss or retries to a minimum.

In a two- antenna system with transmitting antennas, ANT1 and ANT2, the received signal from both antennas will be compared to the CS threshold. The receiver will remain on the antenna that exceeds the threshold. If the ANT1 signal is sub-optimal, the signal level will be checked via ANT2.

Controllers in antenna diversity systems usually have either

● a continuous-switch mode where the receiver actively listens for longer periods for a signal that exceeds the CS threshold.

Some diversity systems are able to remember the antenna that performed optimally on the previous use and preferentially revisit it when the system is subsequently used, which potentially shortens start-up times.

The role of frequency in spatial diversity:

Antenna diversity systems operate at a single frequency. The frequency used will be determined by its application. For the most well known wireless technologies that use antenna diversity, at least two antennas are needed for the radio to perform with the highest data rates.

WiFi antenna diversity is specified in a number of the WiFi Alliance standards including 802.11 a, ac, b, g, n, and utilizes multiple 2.4 GHz or 5 GHz antennas, switching between them to source the best radio frequency signal for data transmission. On a typical router, WiFi antennas are located in separate locations so that each receives a different version of the client signal.

LTE connectivity is reliant on the use of multiple antennas, and a number of techniques are used:

MIMO stands for multiple-input and multiple-output and refers to a method that is used to expand the capacity of a wireless link by using multiple transmitting and receiving antennas. It is a feature of LTE and other wireless technologies but varies from spatial diversity technique as more than one wireless signal is simultaneously received rather than improving a single data signal.

Antenna diversity has proven itself as a practical and effective method of overcoming the problem of multipath interference in wireless links. It is capable of being competently set up in a range of environments from densely populated urban districts to open bodies of water. As spatial diversity can work at any frequency, the use of paired or multiple antennas is used with a range of cellular and wireless networking technologies. For optimal performance of a diversity scheme, a careful site survey is always best, with the careful installation of suitably spaced antennas.