RP-SMA female connector is also called "jack" and RP-SMA male is also called "plug."
This antenna cable is suitable for wireless / WiFi & WiMax networks: 802.11N, AC, G, A, B. 900MHz, 2.4GHz & 5GHz applications, as well as any other frequency between 0 and 18GHz. See Wifi Network Standards.

Lead-free and ROHS compliant: The entire product is ROHS compliant (connector and antenna).
Coaxial cable type: 0.81mm mini-coaxial cable (Impedance: 50 Ohms): This is a very thin and flexible cable, with a black jacket. When connecting U.FL connector to a jack on a miniPCI card or board, often the tight space requires the use of 0.81mm cable, because it is very thin and flexible. The very thin cable is typically needed both because of the small size of the W.FL and MHF3 connectors, and because in tight spaces inside of enclosures, the W.FL (MHF3) connector will snap down on the jack without popping off.
Contact us for special orders.

The gender is referring to the pins inside-not the threads. RP-SMA male has threads on inside. 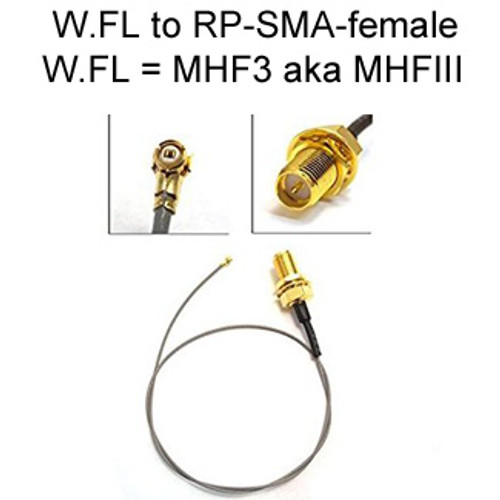