See other options of FME to SMA cables, and adapters, that we carry.

FME (For Mobile Equipment) is a miniature 50 Ohm RF connector with excellent performance from DC to 2.0 GHz.  FME is primarily used with RG-58 or equivalent coaxial cables employed in mobile applications and installations. FME female's narrow, cone-like shape allows FME cables to be snaked through the often tight access holes or spaces of a vehicle to the desired equipment location(s) where an FME male adapter to the required equipment connector series is fitted to the female cable connector.

SMA is a round screw-type connector, with medium-sized, threaded coupling connectors that are rated for frequencies from the lowest (DC) up to 18GHz: This antenna cable is compliant for all types of wireless antennas, including WiFi & WiMax networks: 802.11N, AC, G, A, B. 900MHz, 2.4GHz & 5GHz applications, as well as any other frequency between 0 and 18GHz.

We offer two options of thickness of cable: Both are double-shielded, both are rated for outdoor use and are also suitable for indoor use.

SMA connector fits items that have a (female) SMA jack/connector. SMA refers to the pins inside-not the threads: SMA male has threads on inside

Compatible with all Helium miners used in Europe, including Bobcat miners, Sensecap miners and all other Helium LongFi miners, as are all of our antenna cables and adapters with SMA-male connectors.

Data Alliance's high-quality soldered terminations of FME and SMA connectors with soldering provide a low-loss connection with discontinuities kept to a minimum. 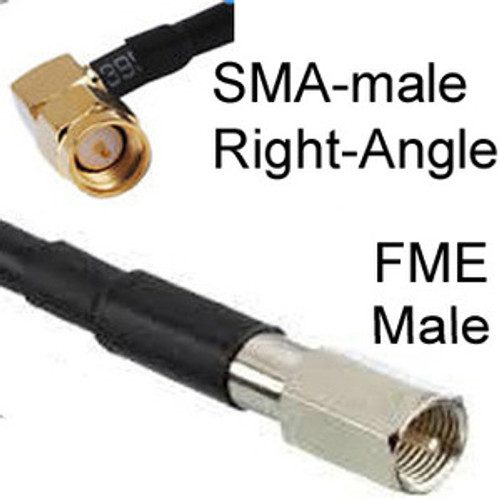