Beamwidth is the angle from which the majority of the antenna’s power, as illustrated on the radiation pattern's main lobe, radiates. It may be measured in the horizontal or vertical planes and is the distance between two points where the power is less than half of the maximum.

Beamwidth varies with the physical and electronic characteristics of an antenna such as type, design, orientation and frequency. It may be horizontal (azimuth) or vertical (elevation) or in the case of omni-directional antennas around 360 degrees horizontally. Directional antennas focus the RF energy in a specific direction, with the bandwidth inversely proportional to the level gain or directivity of the antenna.

Beamwidth is a useful analytical parameter for a number of practical applications including:

The relationship between antenna gain and beamwidth can assist in determining the resolution of an antenna beam and its directivity.

Within beamwidth there are two other key parameters:

Half Power Beam Width (HPBW) is an angle between the half power points of the main lobe as measured at -3dB. This is considered to be the part of the antenna output that has maximum consistency and utility and is closely related to the gain of the antenna. If planning an antenna array, the HPBW will be the point where neighbouring sectors cross over.

First Null Beam Width (FNBW) FNBW is the degree of angular separation from the main beam. It is found between the null points of the main lobe of the antenna's radiation pattern. This measurement can assist in assessment of antenna interference.

What is the relationship between beamwidth and gain?

When the direction and radiation distance of an antenna are known, beamwidth can also be used to determine the signal strength expected for the antenna. Gain is concerned with both the power efficiency and directivity of the antenna and therefore is also closely related to beamwidth. Beamwidth and gain have an inverse relationship. Decreasing the antenna bandwidth will increase the gain. This is because by reducing the beamwidth, power transfer will be increased in a particular direction.

Signal to noise ratio and Beamwidth.

As Beamwidth relates closely to directivity and gain, alteration of beamwidth provides proportional changes in both these parameters. In addition, the signal to noise ratio (SNR), the ratio of signal strength to unwanted interference (noice), also changes accordingly. If beamwidth is narrowed, gain and directivity will increase. This also increases the signal to noise ratio (SNR) favorably. For this reason narrow beamwidth antennas are a prudent choice for long distance transmissions. 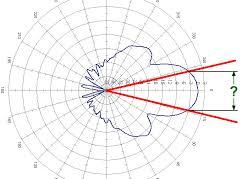