ToughCable and connectors are better compared to other Ethernet cable brands because of their weather tolerant, long lasting design and their capacity to protect a network against electrostatic discharge.

There are two types of TOUGHCables namely;

There are two types of ToughCable connectors namely;

Ubiquiti Networks provides innovative technology platforms and products for Smarthome, Internet access, and Enterprise applications. Some of the products supplied by this company are Ubiquiti Toughcable: Ethernet Cable & Connectors.

Ubiquiti ToughCable is a proprietary Ethernet cabling product that is exclusively owned and manufactured by Ubiquiti Inc, a US company that specializes in wired and wireless networking solutions. It is an industrial-grade outdoor shielded cable that has been specifically designed for installation and use in harsh environments, particularly industrial areas and outdoor conditions. Its extreme weatherproof and waterproof design also permits this cable to be buried, either directly (depending on ground conditions) or via a conduit.

ToughCable is comparable to generic Category 5e cable in terms of its physical and electrical specifications but has some aspects of its design that match higher-rated Category 6 cable.

The national and international standards that specify the physical and electrical characteristics of ToughCable are:

Ubiquiti states that this cable is capable of delivering an uplift in Ethernet link speeds and performance in comparison to Cat5e. It should be installed and used for Category 5e applications, discussed below, and has Electrostatic Damage (ESD) protection that protects networks from electrostatic discharge attacks.

Both types of Ethernet cable are composed of eight copper wires arranged in 4 twisted pairs. This arrangement is characteristic of copper Ethernet wire which is arranged in twisted pairs to minimize the effects of electromagnetic interference. This balanced arrangement is designed so that the two wires have similar exposure to any electromagnetic interference present as a signal proceeds along them from the source. At the receiving end, the two signals should have similar patterns of interference which can be more readily identified and removed to preserve the original signal.

Ubiquiti ToughCable should be used with the complementary ToughCable connectors

Ubiquiti ToughCable Ethernet cable is thicker and heavier than standard Cat5e cable due to its superior shielding and jacketing. A thicker and more rugged cable can prove challenging to terminate effectively with a standard Registered Jack 45 (RJ45) modular connector. Ubiquity has proprietary modular connectors which are specifically produced for use with ToughCable.

ToughCable Connectors can be securely attached to ToughCable without crimping meaning that the cables can be terminated quickly and simply. They have been engineered to deliver added electrostatic discharge protection to the cable assembly. They come in standard and ground wire variants.

Why is Ubiquiti ToughCable important?

Outdoor installation of Ethernet cable is often necessary when installing large area networks that span multiple buildings or large distances. Wired networking still delivers several practical and performance advantages over wireless links, particularly because of increased resilience to the electromagnetic interference and optical phenomena that can occur with wireless networking.

This means that the cable used will have to be able to withstand the key challenges that come with exposure to the outdoor environment or burial.

Standard Ethernet cables are not designed for prolonged outdoor exposure and deteriorate quickly under these conditions. ToughCable is specifically reinforced to hold up against the challenges of an outdoor environment making it a sound investment for maintaining the integrity of your network installation.

Electrostatic discharge (ESD) is a sudden, unexpected flow of electricity between two electrically charged and conducive objects. It is a common problem with electronics, which can experience a charge build-up during manufacture, transport, or storage without being connected to a power supply.

ESD can be very damaging to electronic devices and components, causing them to fail and take down a network. For this reason, sensitive electronic equipment needs specific protection from this phenomenon with effective grounding.

ToughCable is manufactured with care to prevent the build-up of static charge while it is being made. Electrostatic Discharge Protected Areas are special manufacturing environments (specified by the IEC and ANSI) that are clear of charged materials and equipment with workers and manufacturing components being grounded with filaments and anti-static mats to prevent any charge build-up. Humidity control is also used to prevent static build-up in the air.

Gigabit Ethernet delivers network connectivity with data rates of up to 1 Gigabit per second. It is also known as 1000BASE-T and specified by the IEEE standard 802.3ab. It is used widely for the backbone of enterprise level-networks and can be used for internet network connectivity, and sharing of a mobile internet connection between compatible devices. Gigabit Ethernet requires at least Category 5e cable, meaning that ToughCable can achieve the performance required for what is now a standard wired local area network technology. 1 Git Ethernet uses all four twisted pairs within the cable for bidirectional trafficking of data at high speed. Due to attenuation, the length of cable used for segments Gigabit Ethernet networking should not exceed 100 meters (328 feet).

ToughCable has the robust power handling needed for delivering Power over Ethernet. Delivery of DC power over Ethernet cabling enables downstream devices to receive power and transfer data via a single cable. Applications that could benefit from ToughCable integration include VoIP phones, access points, and routers, Closed Circuit Television (CCTV), access control systems, and Point of Sale (POS) devices. With PoE, power is transferred from power sourcing equipment to powered devices. The use of ToughCable for PoE affords significant savings cost and installation time as an additional powerline does not need to be installed. ToughCable can support all of the 802.3 standards for PoE including 802.3bt, released in 2018, which specifies power transfer over all four pairs of wires with up to 100 Watts of power.

ToughCable Ethernet cable and connectors is also designed to work with the Ubiquiti Power over Ethernet Injectors and PoE switches for comprehensive protection against ESD attacks.

Ubiquity ToughCable and ToughCable modular connectors comply with the European Unions Restriction of Hazardous Substances (RoHS) Directive which limits the use of hazardous materials including, lead, mercury, and cadmium in electronics.

How is ToughCable buried in outdoor installations?

Burial of Ethernet cables may be necessary as part of an expansive or outdoor installation and needs to be carefully planned. As an outdoor-rated cable, ToughCable has solid copper conductors and strong PE jacketing, which makes it suitably robust for burial.

Burial is advantageous for outdoor installations as Ethernet cable should not be run on the ground. Burying the cable keeps them out of the way of physical impacts and exposure that could damage the cable. It also keeps the cable isolated from power lines and other structures that may cause interference.

There are two options for burying Ethernet cable:

Before digging a trench to bury the cable, it is essential to make sure that the course of the cable run will not affect utilities. If in doubt this needs to be checked. Ethernet cable should be buried at a depth that is unaffected by surface activity.

Ubiquity ToughCable is a high-quality, outdoor rated Cat5e cable that delivers reliable performance for Gigabit Ethernet and Power over Ethernet. Its structural resilience makes it suitable for a range of outdoor networking applications and is suitable for future-forward network installations that do not require Cat6 or higher. 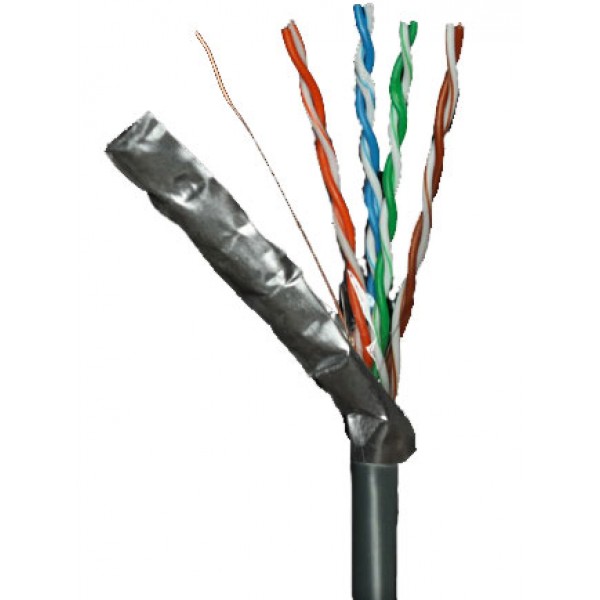