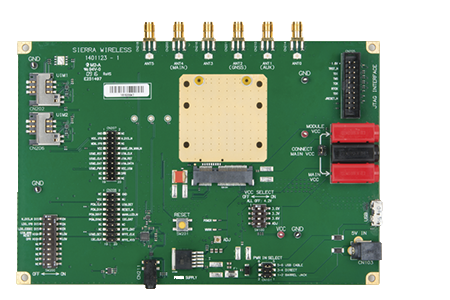 The Development Kit is for LTE product development and has a single PCI slot for the MC7455 card. The Kit is used for developing hardware applications that require LTE connectivity (IoT / M2M) and simultaneously authoring the relevant software.

The functionality of the five SMA connectors:

SMA connectors 1, 2 and 4 connect to the U.FL connectors on the card. Connectors 3 and 4 appear to be unused and available for some unstated alternative purpose - but not specifically for WiFi (see point #5 below):

There is no WiFi functionality in the MC7455 nor the MC7455 paired with its development kit.

There are various vendors that will customize a board for the card, and that the customized board can include WiFi - i.e., provisioning a PCI slot for a WiFi card, such as the Intel Wireless-AC 9260.

QualComm's QU340063 is a compatible board that can have a second PCI slot for a WiFi card.

Data Alliance has a very wide selection of antennas and cables that are compatible with all Sierra Wireless cards and development kits: