LongFi is a proprietary name for the wireless networking protocol used by The Helium in its deployment of a decentralized peer-to-peer network for the Internet of Things (IoT).

The LongFi brand differentiates itself from the LoRaWAN foundation on which Helium networking is based. In particular, LongFi networking enables large numbers of IoT devices to connect to individual hotspots or gateways and for hotspots to interact with each other. Authentication, security and remuneration for network services is provided by the Helium blockchain making LongFi essentially a combination of a LorRaWAN and Helium blockchain.

LongFi can therefore be used to enable compatible devices to transfer data to the Helium network and for the coverage provided by hotspots to be validated. LongFi is designed to handle sensor based data like environmental data, the location or position of objects, or telemetry data from machines or devices.

Is LongFi the same as Long-range WiFi?

No. LongFi is not an 802.11 protocol and is completely distinct from WiFi. Long-range WiFi is the use of directional antennas to set-up long distance point-to-point WiFi connections and wireless bridges. Directional antennas with good line of sight can increase the range of WiFi to several kilometers.

LongFi massively exceeds conventional WiFi and Bluetooth in range and low energy consumption. It does not consume as much bandwidth as WiFi as the amount of information transferred in individual transmissions is low.

Though LongFi and LoRaWAN both support long-range low-power networking, LoRaWAN is purely a wireless networking technology, whereas LongFi combines LoRaWAN with the Helium blockchain.

Bluetooth is a technology for Personal Area Networking (PAN) and though it can be used to create mesh networks it is unable to compete with the transmission range and coverage of LongFi for supporting IoT devices.

5G cellular networking has some decentralized networks that operate similarly to Helium/LongFi and can compete on coverage. However, cellular IoT networks use licensed portions of the radio spectrum which is expensive. Helium is soon to deploy a 5G version of their network Helium 5G which operates in a more lightly licensed (and therefore cheaper) frequency band known as the Citizens Broadband Radio Service (CBRS). 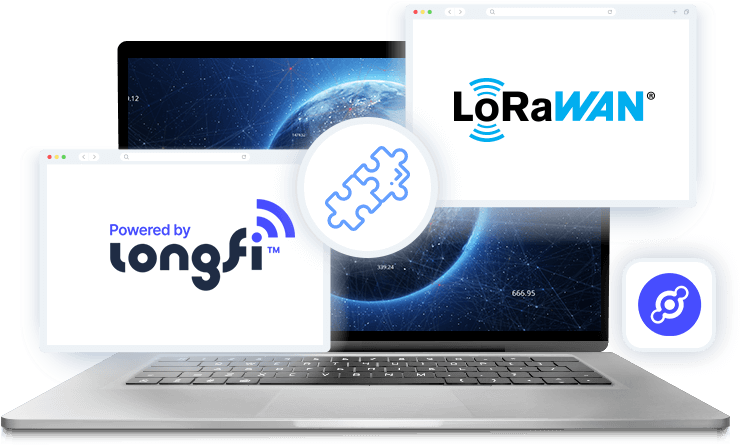 Helium LongFi uses sub-gigahertz unlicensed frequency bands, the same band that are used for LoRa networking. These frequency bands are designated as Industrial Scientific and Medical (ISM) bands and are free to use meaning that LongFi can be deployed at a lower cost than cellular networking which uses the licensed spectrum. The LongFi frequency bands are:

Sub-gigahertz radio frequency signals are capable of traveling long distances with significant penetration of vegetation or buildings. Depending on the terrain, LongFi signals can travel between 1 and 10 miles (1.6 and 16 kilometers).

Helium LongFi is designed to support battery-powered, sensor-based devices that may signal intermittently. LongFi connectivity preserves battery life which often can exceed one year without the need to recharge.

Data packets sent via LongFi are usually between 5 and 20 Kbits per second. Larger data packets can be broken up into smaller ones for transmission, preserving energy and bandwidth.

Like LoRa, LongFi uses spread spectrum modulation which conserves battery life and bandwidth. The specific modulation is a variant of the Chirp Spread Spectrum (CSS) technique used by LoRa where information is encoded using frequency modulated wideband pulses known as chirps, to encode the information that will be transmitted.

LongFi updates are usually over the air (OTA) updates.

As LongFi is a type of LoRaWAN, it uses the LoRa chipsets developed by Semtech, the creators of LoRa. LongFi is compatible with:

These end-nodes are low-power long range transceivers that are embedded in devices to transmit and receive data using long-range spread spectrum communication.

LoRa antennas of a compatible frequency band can be used for sending and receiving LongFi signals. External LongFi antennas can be used to boost signal range and can be positioned for optimum performance of a Helium hotspot.

Helium network has used LongFi to enable anyone to participate in providing network coverage. The LongFi network protocol is affordable, secure and readily scalable. The coverage of a large city is achieved with only 50 to 100 Helium hotspots. The Helium network is able to support large numbers of IoT devices, enabling continual data transfer without the centralized control that is a feature of most private IoT networks. LongFi technology is key to automating network processes and ensuring that participating Hotspots or gateways are remunerated correctly with Helium Network Tokens.

LongFi technology is used to onboard devices without third-party involvement. Conventional onboarding of devices to a new network requires a centralized authority to authenticate participant devices before they can use the network. With Helium LongFi, the Helium blockchain is used to facilitate companies adding as many devices as required without authentication hurdles. IoT clients are assigned an identifier that is added to the Helium blockchain which tracks the data sent from client devices that carry that ID. The blockchain registered ID means that devices that have an assigned ID will be trusted by all hotspots in the network.

LongFi enables devices to connect to any hotspot and send data without being centrally authenticated as the blockchain ID can be verified by any participating Helium Hotspot.

LongFi can enable and facilitate direct remuneration of hotspots by devices for sending data. These automated micropayment transactions enable Helium Hotspot owners to be paid for providing a network gateway. The process takes milliseconds.

When a data packet is sent by an IoT device to a specific hotspot the unique blockchain ID is used by the Hotspot to verify where the device comes from and where its data should be forwarded. Hotspots then sends a preview of the data packet to the destination data center. To receive the full packet the destination datacenter must send a data credit payment to the Hotspot, which then will forward the full data packet.

This payment protocol makes Helium different from other LoRaWANs. Without it, devices would be able to exchange their data over the network for free. The unique cryptocurrency payment system means that Helium Hotspot owners are incentivized to provide and expand the LongFi coverage that the Helium network relies on.

Unlike other wireless networking protocols, LongFi does not require a specific data packet size for transmission. The combination of LongFi and Helium blockchain also provides a cryptographic time and location record that is immutable and highly valuable for correlating logged data and has a range of specific applications including logging delivery of items, geolocation of devices and tracking of meteorological data. Helium is actively encouraging developers to use LongFi to develop novel commercial applications that can be run on The Helium Network and are due to release a LongFi SDK.