Surge Arrestor is not protective

The surge protector guarding your electronics from lightning strikes and grid surges will not protect your equipment if the ESD originates from contact with the device. Even low-frequency ESD can travel down tightly-wound cables through an Ethernet port and cause data loss or even physical damage. 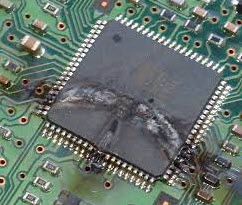 Electrostatic Discharge (ESD), more commonly known as static electricity, is the result of a sudden transfer of charge between bodies that touch. Since all that is necessary for a discharge is differing electrostatic potential, ESD can cover a huge spectrum offrequencies.

When humans feel ESD - for example, when they walk on carpet and then get shocked by a doorknob - they are feeling discharges of 3,000V or higher. However, ESD below the range of human detection can still fry network gear.

An added layer of protection for your Ethernet ports against both surges and ESD (also known as "transient" events) can be installed in the form of Transient Voltage Suppression (TVS) diodes. When added to the chain of current, a TVS diode acts as a "trap door," grounding the transient current before it can damage sensitive equipment.

TVS diodes increase the capacitance load and clamp voltage, so the right TVS diode must be selected to avoid disturbing the signal quality.

What are surge and protection devices?

Surge Protection Devices or (SPDs) are electronic devices that are designed to protect electrical and electronic equipment from the effects of a spontaneous overvoltage event or electrical surge. They are installed within devices, signal lines, circuits, and networks and provide a route for diverting excess voltage or current away from components that may be susceptible to damage.

Surges are sudden, transient increases in voltage or current in an electrical or electronic circuit. They are short-lived, lasting milliseconds or microseconds, and measure as less than half of the normal power waveform cycle. They are also known as transients. Electrical and electronic equipment vary in their ability to withstand deviations from their normal operating voltage, meaning that surges will have a damaging effect on almost all equipment that is exposed to them.

Surges originate inside or outside affected buildings with the majority arising from within a building and affecting mains electrical lines or radio frequency signal lines. Notable causes of electrical surges include:

Other than lightning, external causes of surges or transients include switching events undertaken by utility companies. The resumption of an interrupted power supply, adjustments in power allocation, and disturbances in the quality of power delivered are also damaging. 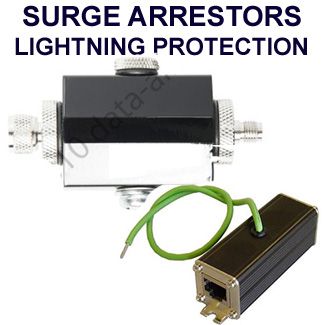 Electrical surges, including lightning strikes, are capable of causing significant damage to Ethernet hardware and cabling such as outdoor CCTV installations. The direct voltage, as well as electromagnetic impulses, lead to transients inPoE injectors and cables, causing them to malfunction or fail. Inline SPDs and arrestors for PoE or Ethernet cables are a key method of protecting Ethernet networking equipment from the effects of surges. Types include:

[A] Ethernet Gas Discharge Tubes are in-line SPDs that protect against transients of varying size and duration. They are installed with Ethernet networking components that include routers, switches, repeaters, and injectors and provide high-speed standard Category 5 or Category 6 Ethernet ports for connection. These gas discharge devices are engineered to divert overvoltage that exceeds a certain threshold away from sensitive components via an external earthing wire. Gas-filled tubes, present for each of the Ethernet cables twisted pairs, conduct the overvoltage earth when the threshold voltage is exceeded.

[B] Transient Voltage Suppression (TVS) diodes are Ethernet arrestors that are made up of an array of diodes that protect each of the wires that make up the twisted pairs of an Ethernet cable. When added to the chain of current, a TVS diode acts as a "trap door," grounding the transient current before it can flow down the dataline. TVS diodes increase the capacitance load and clamp voltage, so the right TVS diode must be selected to avoid disturbing the signal quality.

TheUbiquiti ETH-SP Surge Protector is a proprietary surge protection device produced by Ubiquiti and designed to protect Ethernet networked components from electrical surges and electrostatic discharge. Damaging currents and voltage are efficiently diverted to the ground, leaving the networked devices unaffected. The ETH-SP designed for use with Ubiquiti AirMAX and Local Area Networking (LAN equipment) and is plug and play.

It provides two passive, surge-protected Ethernet In/Out ports for RJ45 plugs and a center grounding point. The device is grounded by using an included self-tapping grounding screw to connect the surge protector to a metal pole or grounding wire. The ETH-SP is capable of absorbing transient current and responds to surge voltages of 100V to 1kV per second.

The Restriction of Hazardous Substance (RoHS) directive is European Union legislation that seeks to limit the inclusion of harmful substances like lead and cadmium in the manufacture of electronic equipment. These high-quality surge protection components not only comply with RoHS but also use materials of good provenance which have not been procured from sources associated with conflict or forced labor. In particular, the conflict minerals Tin, Tantalum, Tungsten, and Gold are sourced in compliance with the Conflict Minerals Regulation and Section 1502 of the Dodd-Frank Act.

Why are lightning and surge protectors important?

As networking and electronic technologies are relied on for an increasing number of critical functions and require safeguarding from the causes and effects of surges. Transients affecting equipment are usually low energy but where the overvoltage is large it can have detrimental effects on a broad range of equipment including:

Lightning and surge protectors are critical for protecting electrical and electronic hardware from overvoltage from a variety of sources:

Lighting is a well-recognized cause of electrical surging, though it is estimated to be responsible for only 20% of surge events. It can cause significant damage to devices, equipment, and networks. It is a massive spontaneous electrostatic discharge, and its frequency varies by location.

Electrostatic Discharge or ESD is a significant cause of damage to networking equipment and electronics. It is caused by a spontaneous flow of current between two conducive objects or surfaces that have stored up charge in a capacitive manner. A key mechanism for this charge build-up is electrostatic induction, where there is a transfer of charge from an ungrounded object.

An imbalance in the level of charge between the two surfaces leads to a discharge of current from the more highly charged object to the lesser charged item as the current finds the fastest route to earth.

Though the human perception of ESD takes place at a threshold voltage of between 2000 to 3000 Volts, ESDs below this threshold are still capable of discharging enough energy to do electronic equipment some serious damage with the initial current waveforms generated by an ESD being the most disruptive.

ESD is a major cause of the sudden failure of electronic devices. Equipment manufactures have to take care to prevent its occurrence and prevent the build-up of static electricity in components as they are assembled, stored, and shipped. Key strategies for the prevention of ESD include working with charged materials in an electrostatic protection area (EPA) , humidifying the manufacturing environment, and the use of anti-static mats, wrist bands, and grounding for workers. Specialist packaging and care with the installation of electronics also help to prevent ESD.

Electrical and electronic equipment can also be affected by Electromagnetic Pulse damage. When electrical current flows, it has both an electrical and magnetic component. A large discharge of electrical energy can produce a magnetic field that is capable of transferring large amounts of energy and inducing current in objects that are not directly connected but switched on. The most common cause of this pulse damage, which often does not show any physical signs is a lightning strike. Surge protection devices and lightning arrestors offer only limited protection against the effects of this type of attack. The best protection comes from disconnecting devices when they are not in use.

Overvoltage in electronic equipment like computers, routers, and other devices disrupts is their analog and processing function, leading them to malfunction or crash. Disruptive effects include data corruption or loss and damage to software. If the disruption is not severe these problems are remedied by resetting the system, though data may not always be recoverable.

If the transients or surges are recurrent they will have a gradual, degrading effect on electronic circuits. The excess voltage prematurely wears and breaks down the components reducing equipment lifespan and increasing the risk of device failure. Capacitors, insulators, and semiconductors are particularly affected by the associated overheating that comes with overvoltage.

Frank damage to equipment occurs when large overvoltage and surging pass through unprotected equipment. If the overvoltage is severe, the heat generated by power follow-on causes the degradation of insulation and dielectric components, charring of circuit boards, ruptured casing, and fire. If a short-circuit occurs it can route the power to earth without showing these signs of significant damage.

The disruption, degradation, and damage caused by surges are capable of shutting down entire networks with the follow-on impacts on service, productivity and data integrity. Downtime has become more problematic as the use of electronics has increased, meaning whole industries, commercial sectors and communities can be significantly affected if a transient or surge occurs.

Downtime includes the follow-on effects of equipment or networks being shut down by degraded or damaged components. The economic costs, explored below are significant and also, there is the loss of time, data, and productivity. The National Lightning Safety Institute reports that lightning damage alone costs the US economy $6 billion each year. Critical facilities lose up to $130,000 every time a surge takes place.

Are SPDs the same as fuses and surge protectors?

What are Power over Ethernet (PoE) surge protectors?

Power over Ethernet SPDs deliver data line, power line, and ground-to-line surge protection at the range of voltages used by PoE. They are available for key PoE voltages such as 30 and 60-volt systems commonly used for powering remote access points and CCTV. They are usually installed between the PoE hub and any networked devices to divert any surges away from the sensitive equipment via an attached grounding wire.

Surge protection for Ethernet and Power over Ethernet is a critical part of protecting the functionality and uptime of networks. Ethernet surge protection devices use a range of methods to effectively deal with unexpected overvoltage meaning complex networks and sensitive equipment can maintain their best performance.

If a network is highly sensitive, with surge damage a potential disaster, additional precautions can include permanent or metallic wrist straps, ESD-resistant shoes and mats, ESD testing stations, and adoption of strict anti-ESD procedures.