The Helium Network, also known as Helium and The People's Network, is a decentralized, user-supported network that provides sub-GigaHertz connectivity for IoT devices and applications. Their novel mesh network, based on LoRa technology has achieved expansive coverage in the UK and Europe with just under 70,000 hotspots available to connect to in over 3,000 cities. It is almost exclusively made up of Miners or Hotspots that are owned by private individuals who provide long-range connectivity in exchange for earning a proprietary cryptocurrency known as HNT.

Helium has now set its sights on expanding its business model to provide 5G coverage on a similar basis to its providing low-power wide-area network coverage. Rather than LoRa based technology, the Helium 5G wireless network will provide cellular coverage for smartphones and IoT devices that utilize the US Citizens Broadband Radio Service (CBRS). Helium 5G is expected to operate on the same basis as the original LoRa network, consisting of privately owned Hotspots that will provide coverage on the 3550 MHz-3700 MHz CBRS spectrum. This can be used for cellular IoT connectivity and in time with an adequate density of coverage, be utilized by mobile network operators to augment their existing coverage.

How will the Helium 5G Network work?

The new 5G version of Helium is based on open source private 4G/LTE and 5G networking technology that is already in existence. The Helium network will utilize hotspots produced by FreedomFi.

FreedomFi is Helium's partner in the deployment of its novel peer-to-peer 5G network.

FreedomFi is an existing provider of open source private 4G/LTE and 5G networking, that is used in remote locations or to support cellular IoT networking. They produce proprietary gateways that can be used with small cell hardware (femtocells, picocells, or microcells) and managed via their SaaS portal.

FreedomFi's open-source gateways are currently being configured to be compatible with Heliums networking protocols making it suitable for offloading carrier networks in return for a cryptocurrency reward. The FreedomFi gateway hardware is the equivalent of the Miner in the Helium LoRa network.

The proprietary hardware is not yet available but gateways for this new 5G network are available on pre-order.

The specifications of the CBRS radio will determine the cryptocurrency mining capabilities and therefore earnings of the setup. Multiple CBRS radios can be connected to a single gateway to maximize data throughput and cryptocurrency rewards. The overall setup is expected to cost participant gateway owners between $1000 and $3000 overall.

The gateways will need to be connected to a CBRS small cell. Suitable cells are primarily available for indoor use, with outdoor cells coming to the market soon. Indoor cells are expected to be more advantageous and profitable because cellular network providers are limited by the coverage they can achieve in indoor spaces and therefore may be inclined to use Helium for data offloads.

Helium network participants will be expected to purchase the required components including the Helium compatible FreedomFi gateway and connect them to the internet via an Ethernet cable.

Helium 5G has a shorter range than the standard LoRa version of Helium.

Helium's 5G coverage is about three times the size of an enterprise-caliber WiFi access point. If a hotspot is set up outside with suitable external 5G antennas, it can provide coverage that exceeds 6 miles with a line of sight. If a gateway is in a non-line of sight location, coverage is reduced. This is because at 3.5 GHz there is poor signal penetration of walls and vegetation.

The FreedomFi gateway is also capable of operating as a standard LoRa Helium hotspot. Both cellular and LoRa Helium hotspots will have to be separated by at least 350 meters ( feet) to ensure that cryptocurrency earnings are not lost through 2 hotspots being recognized as a single hotspot.

Helium 5G network participants receive cryptocurrency rewards in return for providing wireless network coverage for cellular devices. Helium's proprietary HNT cryptocurrency will be able to be earned for Helium 5G in the same way as it is earned on the standard Helium network. The Helium 5G gateway is expected to earn at least as much as its standard counterpart. More powerful and expensive radio setups will be able to mine the Helium Network Token (HNT) at a faster rate.

The blockchain and cryptocurrency reward system used by Helium is to authenticate the network coverage it provides. The HNT currency is currently worth around $16 per token and can be freely exchanged for cryptocurrencies like Bitcoin for fiat currency at a cryptocurrency exchange.

US cellular network operators will off-load cellular data to Helium gateways dispersed through a geographical territory.

Maximizing 5G coverage is a priority for cellular network operators who want to meet key 5G strategic goals including the deployment of:

Helium is currently working with several undisclosed US mobile network operators. Details of cellular network partners are expected to be released in late Q3 of 2021.

About the Citizens Broadband Radio Service.

This is a frequency band that is unique to the United States and has been designated by the Federal Communications Commission for commercial use as well as military aircraft and radar in restricted portions.

The 3.5 GHz CBRS band spans 3550 to 3700 MHz. In 2029 the military restrictions were dropped, making this band wholly available for commercial networking, by wireless service providers. Legacy network users from the military are protected by a priority access system.

The exceptional availability of this prime frequency band has provided the opportunity for companies like Helium to deploy a 5G mobile network without requiring a spectrum license. Helium aims to exploit this by making data transfer on their 5G network competitively priced and provide a unique sharing arrangement using CBRS compatible equipment that can be purchased and operated similarly to the LoRa-based Helium Hotspot or WiFi.

The beta program for Helium 5G is due to commence in September 2021. It will start with the release of a limited number of the FreedomFi gateways for mining HNT cryptocurrency.

The use of the CBRS spectrum means that Helium 5G will only be available in the United States. Helium is currently working on a WiFi-supported model that may be deployed for mobile data offload globally. 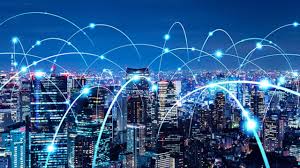