2022 marks two years of progress into the fifth decade and generation of cellular networking. The much anticipated 5G roll-out is currently underway but its transformative effects on communication and connectivity are yet to be fully felt while 4G/LTE is still mainstream.

However, one area in which 5G New Radio is making accelerated progress is in adoption for Internet of Things applications, with leading cellular industry bodies predicting increasing market interest, a reduction in costs, and consumer and enterprise adoption for cellular-based IoT networking in 2022 and onwards.

The cellular networking sector has made a significant investment in the new infrastructure, spectrum allocations, and technologies required to successfully deploy 5G for IoT. There has also been the development of new standards that realize the vision of using the cellular network for supporting IoT networked devices and infrastructural applications at scale.

The way in which 5G has been devised and deployed has meant that it is able to support contemporary, mainstream IoT applications like smart utility metering which longer-term objectives such as the Intelligence Transport System continue in development.

Unique benefits of 5G for IoT

Though 4G/LTE is currently being used to support industry and consumer IoT applications, 5G has key advantages which cannot be matched by the earlier cellular technologies including:

●Massive IoT: a category of 5G cellular networking is solely concerned with providing the bandwidth for the data transfer needs of the massive number of IoT devices.

●Flexibility: 5G offers unrivaled flexibility between the three categories of 5G and frequency bands used for IoT. This means that 5G can be adapted to a wide range of industry IoT applications and switch between categories where necessary to meet service requirements.

●Low latency: millisecond àrangelatency is a key feature of 5G and essential to support the autonomous functioning and responsiveness of IoT applications, for example, in autonomous vehicles.

●Speed: 5G is expected to provide a significant uplift in speed to up to 2 Gigabits per second with some versions of this cellular technology. Bandwidth and strategies are available to offload excessive traffic to maintain speed.

●Reliability: 5G is engineered to have a minimized bit error rate. It is capable of switching the coding mechanisms used to mitigate a high error rate and meet the quality of service requirements.

●Capacity: 5G is being deployed to provide a significant increase in network capacity. With the massive expansion of the cellular network with non-conventional means including 5G core, small cell towers, and non-public networks. This to a large extent is in preparation for the massive volume of computational transactions (cloud computing and artificial intelligence) that will be moved through the cellular network.

5G and IoT 2022 statistics and predictions

5G clearly provides the advanced mobile technology that can support the widespread adoption of IoT that is expected to bring about the digital transformation of societies. The reduction in the cost of 5G New Radio devices will be key to accelerating consumer and enterprise adoption and various industries are already procuring the wireless networking equipment necessary to preferentially use 5G cellular technology to support automation within their organization. Looking ahead to 2022 and onwards to the mid-2020, 5G Internet of Things statistics suggest that cellular technologies will be established as a prominent means of connecting IoT devices:

●By the end of 2021, broadband IoT, which includes 5GNR networking will have overtaken 2G and 3G as the leading cellular technology for supporting IoT applications.

●Meters, tracking devices, and sensors are currently the most widely used IoT devices. They include large-scale deployments of smart metering and asset tracking devices.

●By 2022 Ericsson suggests that over 29 billion connected devices will be using 5G with 18 billion of these being IoT related.

●In 2022, the first commercial release of devices that support time-critical IoT connectivity will be expected.

●The GSMA Intelligence forecasts the number of IoT connections growing to 25.2 billion mid-decade.

●GSMA also expects 3.1 billion devices will be using cellular technologies, with the uptake of cellular-based LP-WANs.

●The Massive IoT (NB-IoT and Cat-M) category of 5G is expected to support almost 50% of cellular IoT connections by 2026.

●According to Statista, the revenue for 5G IoT modules will be almost 10 billion US dollars. Roughly one-third of this revenue is expected to be from standard modules, a third from custom 5G IoT modules, and a further third from modules designed for 5G LPWA applications.

●Industry routers and vehicles were the first devices to use 5G IoT networking with a 5G non-standalone architecture (NSA), where the 5G New Radio interface is used with existing 4G/LTE infrastructure. In 2022 the first new 5G stand alone (SA) capable modules will enter the market, supported entirely by the 5G network.

The technologies used to support Internet of Things networking are diverse, there is no single global standard that all IoT devices utilize, and short and long-range technologies like WiFi, ZigBee, Bluetooth, SigFox, or LoRa. These technologies are often open-source and utilize license-free portions of the radio spectrum which can become overcrowded and subject to interference.

Cellular networking solutions use the licensed spectrum and have established benefits in supporting mission-critical IoT applications. 5G cellular networking for IoT provides consistent, reliable, and expansive global coverage, exemplary security and robust performance, which network operators are confident is worth the additional cost. They are able to provide sustained service for even the most complex and demanding IoT applications with network downtime being rare.

Release 16, the latest phase of 5G standards and specifications produced by the Third Generation Partnership Project (3GPP) outlines key enhancements that support IoT networking as it is rolled out internationally.

Since 2019 enhanced capabilities of 5G NR has enabled support for 2 key IoT-friendly features that include:

For the realization of the highly networked urban infrastructure that is described as a smart city, the wireless networking used needs to be highly reliable and responsive as it will support critical systems and services like transportation, health, and law enforcement. URLLC has been developed with these requirements in mind. URLLC is particularly desirable for autonomous vehicle technologies which need low latency, no transmission, and high data rates to remain responsive and keep the vehicle and road users safe.

Processing IoT data transactions will lead to a massive increase in throughput through the cellular network. Low latency is essential for the real-time processing of such large volumes of data in real-time without crippling transmission delays. So far 5G is the only wireless technology that has begun to demonstrate this capacity as it has been specifically developed to achieve this.

[B] Non-public networks for 5G IoT

It is expected that Non-Public or Private cellular networks will play an increasing role in the delivery of cellular-IoT networking. A new wave of Non-Public IoT networks are a key solution demanded by industries where privacy and security are essential. Industrial equipment like robots need enterprise-level security that cannot be met by the current public cellular network. Release 16 specifies private networks that can be used for enterprise-level networking, inclusive of proposed spectrum allocations and specific IoT frequency bands and channels. Expect non-public cellular networks for IoT to emerge in hospitals, colleges, factories, and transportation hubs.

Novel multiplexing techniques that are unique to 5G can be used to create individual end-to-end networks (slices) on top of the existing physical networks. These isolated networks can be dedicated to IoT data transfer as an alternative to a private network.

In particular, 2022 will bring the wider deployment of a new 5G version of the LoRa-based Helium network

Helium has already amassed significant coverage with its peer-to-peer LoRa-based network for IoT devices that rewards hotspot providers with cryptocurrency earnings. The new 5G Helium Network will operate on a similar basis with participants setting up nodes that can be used for IoT data transfer at key 5G frequencies. Nodes are 5GNR radio devices that have an antenna that provides coverage within a localized area. The area of 5G coverage that a privately owned node can cover is expected to be several times the coverage of an enterprise WiFi access point.

2022 is the year that FreedomFi, a US-based provider of private cellular networking begins production of 5G cellular nodes for the Helium Network in earnest. As a leading producer of gateways for 5G networking, they are expecting significant growth in the market for privately owned cellular networking gateways that can be used to offload excess throughput from carrier networks in exchange for remuneration. Pre-order cellular networking gateways or nodes have currently accrued a significant waiting list that commences fulfillment at the end of 2021. The cost of these nodes is at least $500, plus the expense of additional, cellular radio or small cell, 5G antennas, antenna cables, and mounting, and ethernet cabling for indoor or outdoor use, to boost coverage, network performance, and cryptocurrency profits.

The United States has a portion of the radio spectrum available for unlicensed 5G cellular networking access which is increasingly the focus of companies outside of the major cellular networks who want spectrum access for cellular-based IoT networking. The Citizens Broadband Radio Service (CBRS) is an almost license-free portion of the radio spectrum that was originally reserved by the FCC for the radar systems of the US Navy. Also known as Band 48, it is a 150 MHz-wide band that spans 3550 MHz to 3700 MHz which can now be used commercially for public cellular networking. The 150 MHz has been eked out from two LTE bands but is expected to be used predominantly for 5G networking. Network operators who do not have existing licensed spectrum like Helium and FreedomFi are targeting the CBRS band for their cellular network access. In 2020 just over 90% of the available CBRS spectrum was auctioned off by the FCC to just under 230 bidders from multiple industries, generating 4 billion US dollars in revenues. Allocations within this shared band are managed using a dynamic spectrum access system.

CBRS radios can be obtained at a consumer level to run private cellular networks, it is these radios that will be used by companies like Helium and FreedomFi to provide their cellular coverage, with both indoor and outdoor CBRS small cells coming onto the market soon.

5G cellular antennas, cables, and other networking equipment will be key to procuring the best performance from cellular-based IoT solutions

The successful integration of IoT-based applications into the commercial and industrial sectors as well as everyday life is reliant on exemplary performance. This can only be assured by the use of cellular networking hardware that can support the rigorous standards of performance specified by bodies like the 3GPP. 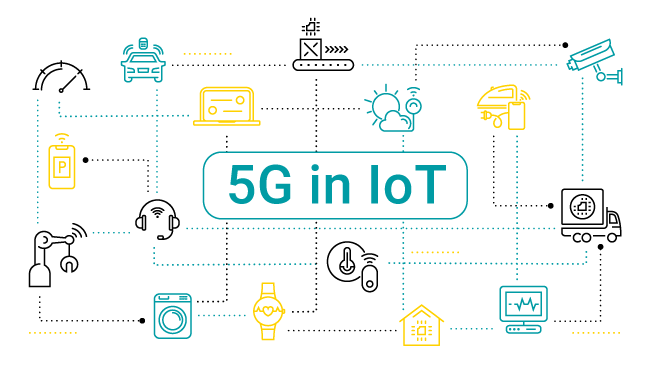