Six feet is not too long for the LMR-100 and LMR-100-equivalent cable that we use for shorter antenna cables. 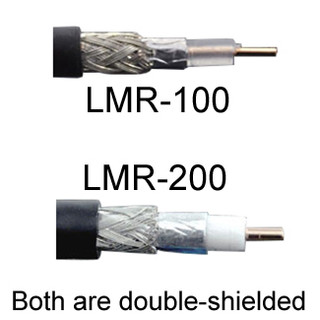 However, it is right at the threshold at which we would recommend that you consider the thicker cable. This comparison shows that the expenditure for the thicker cable, which is about 25% higher cost, is proportional to the benefit of lesser signal loss (attenuation). If you are using small antennas you may need as much gain as possible retained during passage through the cable and it would make good sense to pay the additional 25% for the LMR-200 cable:

The difference is 0.54dB. The addition of an antenna multiplies the power of the WiFi device, such that even a difference of 0.54dB makes a big difference.

For a six foot cable vs. ten foot cable, the difference in your cost between using LMR-100 thickness cable VS. LMR-200 thickness would be $2.00.

Therefore your power increase would be roughly proportional to the difference in cost of the cable.