One of the main challenges encountered in implementing IoT is the diminished penetration of the cellular signal within buildings. Building materials can significantly attenuate the cellular signal, meaning the multi-gigahertz frequencies used in mid-band and high-band cellular networking often have severely limited coverage.

The use of Distributed Antenna Systems, known as DAS is one of many proposed solutions to overcome the limitations of indoor cellular networking. They are now seen as a key part of enterprise infrastructure and are actively deployed to create the secure private cellular networks necessary to support industrial IoT applications.

This article will explain what distributed antenna systems are, the key types of DAS, how they are deployed, and the advantages and disadvantages of a DAS approach to cellular networking for IoT.

What is a Distributed Antenna System?

A Distributed Antenna System or DAS is simply a set of spatially separated, networked antennas that can send and receive signals on a designated carrier frequency. In IoT, DAS antennas will be used for high-speed, low-latency data transfer, but they may also be used for voice connectivity and other types of data transfer. 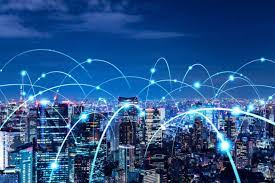 DAS are primarily deployed to enhance the coverage or capacity of a cellular network. DAS systems may not be able to do both tasks simultaneously, so a DAS must be selected for performance in a specific area. Environments like train stations or sports stadia need capacity whereas remote locations like mines or high-density environments that block the cell signal need coverage.

Basic components of a DAS

[A] The signal source

A DAS will need to have a signal to distribute through the territory it covers. The signal source is commonly a base station that is installed to receive the 4G/LTE or 5G signal that is to be distributed via a wired backhaul or wireless connection. The performance of a DAS is determined by the type ( 4G/LTE or 5G) and quality of the cellular signal acquired. The signal source may be an outdoor antenna located where a strong cellular signal can be received (off-air), an on-site base station, or via small cell installations. Depending on the project, signal sources may be combined.

Off-air DAS is fed off the air cellular signal, using a donor antenna and repeater to acquire and bring in the cellular signal to be distributed. It is very similar to the smaller-scale cellular signal used by cellular boosters. Because it is a repeated signal, it adds no capacity to the network that is created. It is feeding on existing capacity. This type of DAS is reliant on the quality of the signal acquired by the donor antenna. If the donor signal is poor or the donor network is congested, then the performance of the DAS will also be poor. However, off-air signal sources are the easiest and cheapest to set up as a solution for expanding coverage inside a building.

Base Transceiver Stations (BTS) and their various node technologies (NodeB, eNodeB, and gNodeB) can be used to create a dedicated signal source that draws directly from a wired connection to the core network. This type of DAS signal source is configured by cellular network operators using each carrier’s fiber connections and is designed with the capacity to support tens of thousands of end-user devices. This is an extremely expensive deployment but delivers the highest performance and is extremely high capacity. Setting up a BTS can also take a long time as it uses specialist equipment from the cellular carriers and has significant space, cooling, and power requirements.

A DAS can also be set up with small cells including femtocells, picocells, nanocells to provide high-quality wireless connectivity to indoor environments. The different small cells all connect individually to the carrier network and generate a strong cellular signal indoors. They require a backhaul connection to the internet for data transfer. The coverage of small cells is limited to hundreds of meters but they can boost capacity and can even be used as a signal source. Small cells are cheaper and quicker to deploy than BTS with comparable performance and the ability to scale capacity if required.

[B] The distribution system

Active DAS takes the signal delivered by the signal source and can convert it for transmission via fiber (fiber DAS) or Ethernet . This is done by a master unit that can convert and even digitize incoming signals from as many cellular carriers as required. The signal is then transmitted to remote radio units, nodes that convert the signal into a radio frequency signal that can be broadcast by the antennas. This is a highly scalable strategy for signal distribution, with the potential to be served by almost unlimited cable runs.

With passive DAS, the cellular signal is transferred throughout a building using coaxial cable, splitters, and other RF components. This is the simplest form of DAS, making it popular with enterprises looking for a solution that is easy to manage. This strategy is vulnerable to the effects of signal attenuation, especially with increasing distance between the rebroadcasting antennas and the signal source. It is a low-cost strategy that does not require analog-to-digital conversion and is easy to maintain. It is a costlier distribution system than passive DAs and has greater power consumption.

Digital DAS uses a digitized carrier signal that is transmitted via fiber or Ethernet . It is an expensive system but very resilient against distortion and interference which may be essential for critical or sensitive applications. There is also greater control over the distribution and capacity of the network as it can be quickly scaled up. Digital DAS is less noisy and has excellent performance but it is the most expensive of the DAS systems.

Distributed antenna systems are a viable option for deploying robust and reliable cellular network coverage for IoT within buildings. DAS requires significant infrastructure investment in addition to the costs and planning required to configure the private cellular network that will be broadcast using it.

In a variety of use cases, DAS has shown efficacy in delivering excellent indoor coverage, which makes it a key solution for supporting IoT connectivity. It is, however, an expensive solution and its deployment comes with a variety of practical challenges that may limit its performance.